Today we are taking a look back at a fun and underrated album, Bleachers’ debut album Strange Desire. Jack Antonoff, the man behind Bleachers, has a history of making synth-heavy, anthemic pop music that’s irresistibly catchy. And on his album, Strange Desire, he doesn’t disappoint. Join us as we complete a Bleachers Strange Desire Album Review.

Bleachers is the solo project of Grammy Award-winning musician Jack Antonoff, whose most famous work was as a member of the band fun. Formed in 2011, the band has since released two studio albums, each of which is filled with catchy pop songs that have become immensely popular on radio as well as online.

Bleachers is heavily influenced but late ’80s and early ’90s synth-driven pop. The music is upbeat and often features heavy use of guitar and synthesizers. Picture John Hughes films with modern production techniques thrown in.

In addition to Antonoff, the lineup on Strange Desire included Vince Clarke, John Hill, Greg Kurstin and Jon Shiffman along with guest appearances from Yoko Ono, Grimes and others.

While Bleachers may not be as well known as some other pop artists out there, it’s clear from listening to this album that there is plenty of talent here. Strange Desire, the debut album from Bleachers was released in 2014. Strange Desire was a critical success and has since gone on to become a cult classic. And for good reason: it’s an incredible pop album.

Jack Antonoff is most known as the songwriter of three Taylor Swift songs, although he has also played in the bands Fun and Steel Train. When he first started out as Bleachers, Vince Clarke of Yazoo/Erasure and Yoko Ono were involved in the production of his first album. 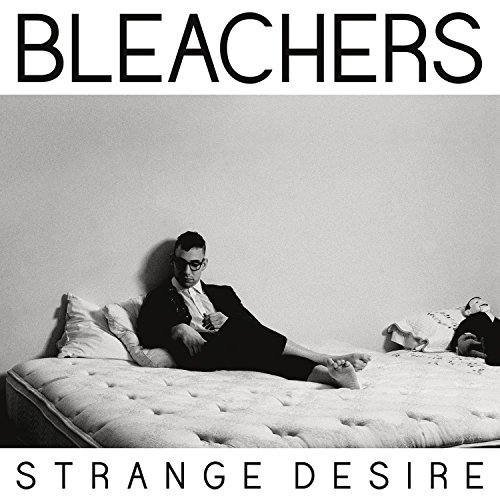 Aside from the fact that he plays guitar for the more well-known band fun., Jack Antonoff’s side project, Bleachers, is far more enjoyable. The songs on Strange Desire aren’t as grating as fun’s “Some Nights” and “We Are Young,” which have been overplayed to the point they are no longer “fun”.

As a fan of pop music, this album will be right up your alley.

With stentorian keyboards, what seems like a chorus of thousands, and echo chamber clattering, “Wild Heart” immediately establishes itself as a massive galumphing beast of a song to kick off the album.

Some songs on the Strange Desire album begins as a slow burn at first, but after a minute or so of atmospheric synth strings, it explodes into an infectious, anthemic pop song that you will have stuck in your head for days. Highlights include “Rollercoaster,” a catchy track with a driving beat, and “Shadow,” which is built around an instrumental hook that is simply irresistible.

The album is filled with catchy, upbeat epic pop songs that will have you singing along in no time. And even though it has the feel of a traditional pop album, there is still plenty here to satisfy fans of more experimental music.

Jack Antonoff seemed to have no qualms whatsoever. Whether it’s winning Grammys or composing modern pop tunes, he can do anything he sets his mind to. “Strange Desire,” the album he just released under the pseudonym Bleachers, makes this point abundantly clear. The project may have started out as a secret during fun’s hectic tour schedule, but it’s hard to believe how he managed to keep it under wraps when it’s so jam-packed with massive tunes.

With Yoko Ono’s appearance on “I’m Ready To Move On/Wild Heart,” Antonoff opens up about his desire to get better in “I Wanna Get Better”; the epic eighties-inspired “like a river runs,” and the storytelling vocals that invite Grimes into “Take Me Away,” this is a debut that is unafraid to tread all manner of territory. Bleachers is Jack free of the chains of preppy college rock and bizarre electronica. In places where fun. was bombastic, Bleachers is explosive!

I would liked the album to have been a bit longer. At only 11 tracks, it’s a bit on the short side. However, this is nitpicking, as each of the tracks is extremely strong.

In regards to the songwriting, Strange Desire does have a wider spectrum of influences than his previous work, but it is still largely superfluous. Even if Antonoff truly wants to improve, he has yet to do so. Despite his popularity, Antonoff’s songwriting has a long way to go.

If you’re a fan of pop music, or if you’re looking for an album that will lift your spirits and get your blood pumping, Strange Desire will not disappoint. With catchy and infectious tunes, incredible vocals, and soaring melodies. If you haven’t already checked it out, I highly recommend giving Strange Desire a listen!

If you are looking for deep lyrics and clever songwriting, then you should probably look elsewhere. Overall, I recommend Strange Desire to anyone who wants an enjoyable pop album that will put a smile on your face and get stuck in your head for days.