written by RabbitHoleMusic December 10, 2021
Spread the love
Affiliate disclosure: As an Amazon Associate, we may earn commissions from qualifying purchases from Amazon.com in addition to other online retailers. This means if you click on the link and purchase the item, I will receive an affiliate commission at no extra cost to you. All opinions remain my own. You can learn more about our editorial policies here.

Today we jump into our Nirvana Nevermind 30th Anniversary album review. Could it really have been 30 year? It seems like just like yesterday I was cracking open the 20th anniversary box set.

Nirvana, the band that changed music forever. The grunge-rockers from Seattle who took a chance and struck gold with their third album “Nevermind,” which was released on September 24th 1991 to commercial and critical success. It is considered one of the best albums of all time and has sold over 30 million copies in the US alone.

Since most everyone has a pretty good idea what the album and it happens to be one of the best album in rock history, I will not waste time giving a lot of background for the review. Instead, we will focus on the sound quality along with the bonus discs.

Nirvana was formed by lead singer Kurt Cobain and bassist Krist Novoselic in 1987 after they met at Aberdeen High School in Washington state during 1985. Add in a skinny young drummer from D.C. named Dave Grohl; from there, they would go on to change rock history. Nirvana is best known for their raw sound, loud guitars and emotional lyrics which spoke to millions of people around the world. Let’s take a look back at this band’s humble beginnings and the creation of this iconic album.

Nirvana recorded Nevermind with producer Butch Vig. The band was determined to create a record with great songs and this was their chance to do it. 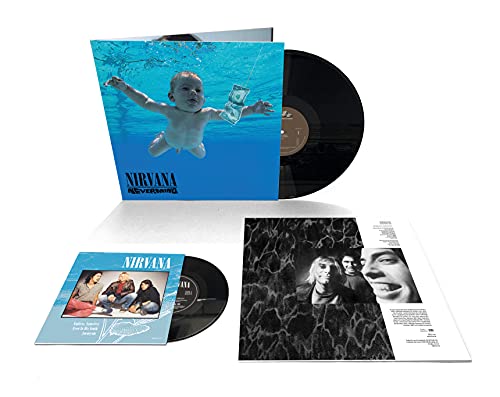 They ended up recording the album at Sound City Studios in Van Nuys, California. The studio had a Neve 8028 console, which gave the album its signature sound. The album’s producer, Butch Vig, was also very influential in the sound of the album. He encouraged the band to use real drums and guitars, as opposed to using samples and drum machines. The recording was quick according to Vig in an interview with Ultimate-Guitar.

“We recorded Nevermind pretty quick. We did the whole album in 16 days. I had worked with Nirvana before at Smart when they had come out about a year earlier to do some demos. Well, it wasn’t for demos but they came out to record an album that was supposed to come out on Sub Pop. That was before Dave Grohl joined the band and what happened is we didn’t finish the record ’cause Kurt lost his voice. I mixed the songs they had finished and the band pressed up 100 cassette copies and gave them out to their friends.”

The album’s most famous track, “Smells Like Teen Spirit,” was written by Kurt Cobain in reaction to the public’s perception of Nirvana. He was tired of people calling them a grunge band, a label that he felt was limiting to the bands diverse music. The song’s title was inspired by a deodorant advertisement that he saw on TV.

As we all know now, this was the shift to alternative music or grunge following the ’80s hair metal era.

Although the song “Smells Like Teen Spirit” gets most the press, my favorite song from the album is “Lithium”. Check our Nirvana Lithium Song Review.

The album was released to critical acclaim and became an instant success. It reached number one on the Billboard charts and stayed there for weeks. It has gone on to sell over 30 million copies worldwide and is considered one of the greatest rock albums of all time.

All three versions are currently available on Amazon below along with the preorder for Nevermind 8 LP Super Deluxe being released in 2022. 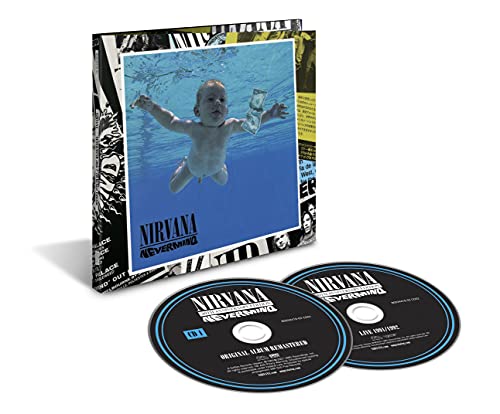 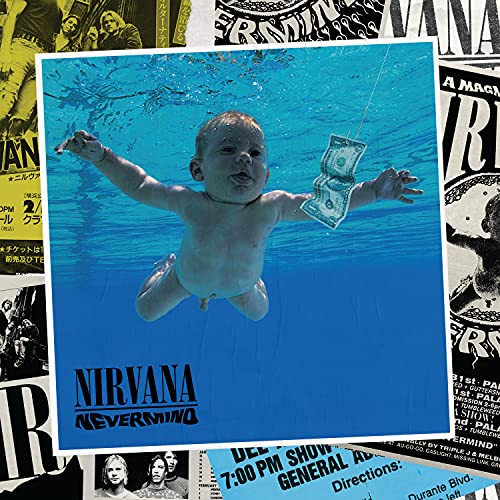 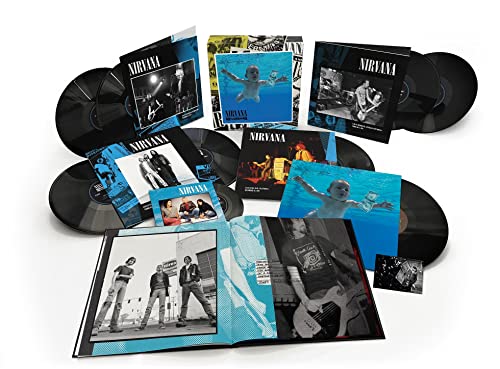 The album’s anniversary 30th anniversary is being celebrated in 2021, along with a wallet busting 8 LP vinyl release that will be released in 2022.

For the 30th anniversary, a different approach was taken with the bonus discs vs the 20th anniversary. Instead of outtakes and B sides there are four separate concerts.

The first concert is from the Amsterdam’s Paradiso show recorded on November 25, 1991. The show features a 17-song set list and is probably the strongest of the four shows in the reissue.

The second show is from Pat O’Brien Pavilion in Del Mar, California recorded from the performance on December 28, 1991. Honestly we are treated to a similar, although shorter tracklist that we head from the first concert. The performance itself is full of raw energy and emotion as would be expected from these early Nirvana shows.

For the third show we get a performance recorded from a show at The Palace in Melbourne, Australia that was recorded on February 1st, 1992. I am not sure if it is me listening to these shows with similar set lists back to back but this performance does not seem to have the energy of the first two concerts.

The final concert is from the show at Tokyo’s Nakano Sunplaza and was recorded on February 19, 1992. Again, we are seeing basically the same set list. I did enjoy the arrangement of the set list of this show the most, opening up with “Negative Creep” and closing the show out with “Smells Like Teen Spirit”.

The real standout of all these discs are Cobain’s performance style. It is memorizing to hear the melody changes, shifts in the solos and raw conviction and energy once again. Truely a once in a lifetime performer.

Honestly I was as excited about the packaging for the LP as the actual music remaster as sad as that sounds. It comes with a beautiful tip-in gatefold sleeve that is top notch. The artwork has been reworked and restored by designer Michael Kurtz

If you are new to vinyl, a tip-in sleeve is one where the cover art is not printed directly of the sleeve. Instead, it is printed on an outer layer of paper and then attached to the cardboard sleeve. A tip-on sleeve’s back contains a rough area on which the front paper folds over at the corners where you can see the paper was applied.

It allows the printing to have better clarity and a lot of classic albums that we know and love was done in this fashion. It’s an old-style sleeve where the the cover art is not printed directly on the surface of the cardboard sleeve, but instead is printed on an outer layer of paper. This is the first version of Nevermind to get a tip-in sleeve produced, all the past issues have been a direct to cardboard print.

I was happy to have this cover in this classics format ahead of any potential child pornography craziness happens and requires the album cover changed.

OK, now that I am done geeking out about the tip-in sleeve I did want to mention the vinyl and music itself. The LP is 180-gram black vinyl and my copy was dead flat upon taking it for a spin. In addition to the single LP with the full album, a 7″ single is included (standard vinyl package is 1-LP + 7-Inch Vinyl edition). The 7″ is a picture sleeve and includes “Endless, Nameless” with B-sides “Even In His Youth” and “Aneurysm.”

Sorry, I did not get the CD to review but again the gatefold sleeve looks great and it is a two disc set with the four concerts previously discussed included. I used high res digital for my review of the concerts this time.

So far everything about the 30th anniversary reissue has been sounding good. Unfortunately the sound quality is where this reissue fell apart for me after hearing the first few audio tracks.

The vinyl and CD both sound brickwalled with no dynamics in them. Playing the music from the original album pressing or the BG back-to-back with this is night and day, The packaging says remastered from the original analog tapes (I thought the original half-inch stereo analog tapes burned in the fire but guess not) but not sure if it was the eq they used or what but this sounds as bad as the 20th anniversary (also not a good mastering).

The mastering for the Nirvana Nevermind 30th Anniversary album was done by Randy Merrill of Sterling Sound. His work is usually top notch but I did not care for what happened here. They usually use Bob Ludwig for the reissues so not sure if they were wanting to get a fresh perspective or what.

I was really hoping they learned since the lackluster 20th anniversary reissue and they were taking a page from the In Utero book. For the In Utero 45rpm 2013 DMM reissue, they simply knocked it out of the park in the music sound quality department on that one.

I will not bore you with my thoughts on each track, will just leave it at this was not for me. Lithium, my favourite track on the album, really suffers from the lack of dynamics. I ended spending more time with the acoustic tracks on Taylor Swift’s Red reissue than I did with Nevermind over the weekend I did the review if that tells you anything.

Again, I do not have the CD but did do some research on it. Looks to have a DR7 which is line with the original CD but from other reviews I read the EQ looks to be off and it suffers from the same lack of dynamics as the vinyl.

As for the concerts, again they were not my cup of tea. The sound quality was just as bad as the bootlegs of these shows that have been passed around the Internet for years. Add the poor sound quality to the fact the shows all have pretty much the same set list and it made for a pretty painful listen for the review.

Below is a breakdown from research done on the Internet to the most likely sources for each show.

Del Mar: Digital PRE-FM is the best source I have heard. Sounds like Universal used an off-speed cassette dub.

Melbourne: Digital PRE-FM is the best source I have heard. A broadcast source, most likely from a long-ago commercial boot, was utilized.

Tokyo: Commercial bootleg CD is the best source, sounds like this is what Universal used.

Although Nirvana is one of the top alternative rock bands ever and Nevermind is an amazing rock record, I did not care for the 30th anniversary treatment of the album. Although it did get top notched packaging, the lack of dynamics and poor sound quality just did not work for me on this release. My recommendation is unless you are a Nirvana completist to pickup one of the preferred releases from our Nirvana Nevermind Album Shootout and hold off for the 40th anniversary to see if we get something better.

I came in with high hopes and hoped they learned from mistakes of the 20th anniversary and we would be treated to a 2013 In Utero type reissue but I was flat out wrong. I honestly could not recommend the release for anyone outside of Nirvana completists. Finding a less expensive BG mastered version of Nevermind will both save you some money and give you a lot better sound quality.