written by RabbitHoleMusic December 8, 2021
Spread the love
Affiliate disclosure: As an Amazon Associate, we may earn commissions from qualifying purchases from Amazon.com in addition to other online retailers. This means if you click on the link and purchase the item, I will receive an affiliate commission at no extra cost to you. All opinions remain my own. You can learn more about our editorial policies here.

It’s beginning to feel a lot like Christmas and Norah Jones Spreads Holiday Cheer with some new performances. With the help of Norah Jones, it is going to be a great holiday this year.

Norah has been doing a round of promotion for her newly released 2021 album, I Dream of Christmas. Though we would share some of the recent performances from her 12/03 appearance on Jimmy Kimmel Live in addition to her rendition of the classic “White Christmas” at Rockefeller Center earlier in the month. 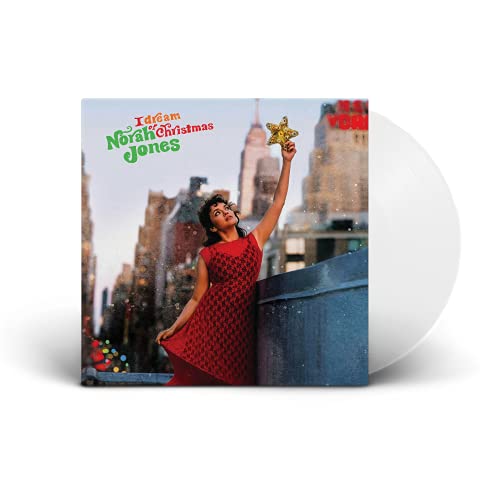 The Kimmel performance features Norah on piano and the performance is one of her new holiday songs, “Christmas Calling (Jolly Jones)” from her newly released I Dream of Christmas album. Everything about the performance is gorgeous, from the setting to the lush vocals from Norah. The new song has a unique ability to sound familiar and recognizable while being a new track. It’s as easily digestible as a holiday sugar cookie and sounds wonderful.

The second performance features Norah Jones at Rockefeller Center in New York City. Again the setting and performance is spectacular and gets us ready for the bundling up in front of the fire for the holiday season. For the performance I selected, Norah does a a classic song, “White Christmas”, instead of one of her new holiday songs. This was one of the songs I was most excited to hear from the album. With the definitive Bing Crosby version from ’42, it is hard to top the classic. I was pleasantly surprised that Norah went an entire different direction and made it more up-tempo with jazz swings.

Follow as Norah Jones Spreads Holiday Cheer through the entire season with her upcoming performances listed below:

Love music and collecting vinyl but need to more, read our How to Store for Vinyl Records article.

Norah Jones Let It Be Cover from Empire...